By now you’ve probably heard that historic downtown Frisco has been rebranded as The Rail District Frisco, and will soon receive a little facelift.

Many creative minds, loyal volunteers, city leaders, business representatives and members of the community who value our historic roots have come together to drive an amazing revitalization project known as The Downtown Master Plan.

In fact, it’s worth noting through in-person and online surveys over 1,200 stakeholders were involved. Along with help from award-winning consultant group Gateway Planning, the ideas put forward are nothing short of innovative, thoughtful…and spectacular. 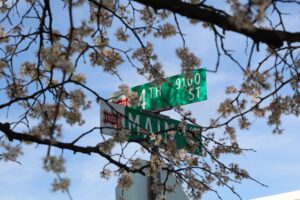 The vision for the area will incorporate connectivity, open spaces, and alternative street configuration with walkability as a key component, all the while preserving the historic character of the area.

Improved multimodal (vehicle/bicycle/pedestrian/transit) connectivity between The Rail District, Frisco Square, and surrounding neighborhoods are a priority. A 4th Street Plaza, improved parking and traffic flow through Main Street and other avenues in the Rail District, and ‘Character Areas’, such as a proposed Design District, connecting the Heritage Center to the Silo area.

One consensus reached during the planning process is that “Downtown Frisco should be a place to drive to, not drive through.”

Gateway Planning, the lead consultant in updating the Downtown Master Plan, along with City Staff has conducted several public meetings, open houses, and surveys to solicit public comments in drafting this document. The process has been robust and led to several creative proposals to continue to support the growth and redevelopment that has been occurring in the downtown area.

Current Update on the Project

Last week all parties (City Council, the Planning and Zoning Commission, and the specially appointed Downtown Master Plan Committee – DTMPC) came together in another joint session meeting to review the next stage. The focus of this agenda involved an in-depth presentation and discussion about various options for traffic flow, parking and sidewalk width along Main between 1st Street and North County.

Following a brief update of the previous joint work session, Scott Polikov, President of Gateway Planning and Rob Rae of Walter P Moore, presented Options A through G of the proposed redesigned Main Street to all parties. Emphasis was placed on some critical aspects to be considered when making a final decision on the general layout, its impact on local businesses and neighborhoods, and the overall required functionality of Main Street. Following a lengthy discussion between the City Council, Commissioners and the Downtown Master Plan Committee, Mayor Jeff Cheney concluded that the majority were in favor of option ‘B’; a plan whereby the central median would be eliminated and replaced with a center turn lane. This would provide additional sidewalk width and improved pedestrian safety and traffic management over existing conditions.

Option ‘D’ could possibly be phased in over time, which would involve the elimination of on-street parking.

A brief discussion around utility issues took place and John Lettellier explained he’s been working with Oncor to identify options for the future. The purpose of the next Downtown Master Plan meeting on September 5, is to obtain the Committee’s recommendation on the draft report, to then forward it to the Planning and Zoning Commission’s meeting later this month, and finally, to be presented for City Council approval in October.

Gateway Planning Consultants will now finalize the report with options B and D and include all other options as appendices.

Summing up the efforts following the City Council meeting last week, Mayor Cheney was excited to announce the changes, stating,

The area will now be designed more for the pedestrian and business owners, bringing the sidewalks out creating more patio space, presenting a great walkability factor and making it an active and lively place to be. All of the meetings are open to the public for their comments and they encourage people to attend this week’s meeting, in particular, Wednesday, September 5 at the Frisco Chamber of Commerce, 6843 Main Street, 6:00 pm. Review the agenda and details here.

Current development already approved or underway in The Rail District includes several projects by Nack Development: Tower at the Rail, Patios at the Rail, The Calaboose, Nack Theater

For more info about these and other revitalization plans in The Rail District, refer to the following articles:

5 Things To Know About The Rail District in Downtown Frisco

Welcome to The Rail District in Frisco, Texas